DEDICATION of the CONVENT at RUPERTSBERG 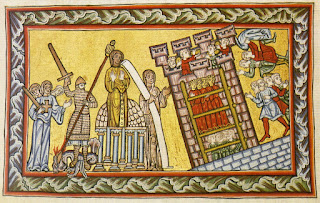 Today, the first of May, is the anniversary of the dedication of Rupertsberg Convent in 1150. Hildegard of Bingen was the foundress: about this same time, she completed her first book of visionary writings, Scivias. This included an early version of the liturgical drama Ordo Virtutum, which may have been performed as part of the dedication ceremonies at Rupertsberg.

I consider Hildegard one of the greatest aesthetic theorists in the history of the Church, along with her contemporaries Suger of St. Denis and Hugh of St. Victor. Of the three, Hildegard expressed her aesthetic theory in the most personal and mystical manner. In each of them, the great theological ideas of Dionysius and Augustine were brought to harmony and given iconodulic expression.

From this combination of ideas, and about this time, emerged one of the greatest artistic achievements of the Church: the art and architecture called Gothic. The other greatest achievement, polyphonic music, emerged also about this time, and perhaps under the same influences. While Hildegard’s own musical compositions were, as far as we know, all monophonic, the theology of music expressed in her epistle to the prelates of Mainz provides a motivation for polyphonic composition: the desire to make listeners hear as they would hear in a sinless world. As I wrote in my lecture Heavenly Outlook:


In the newly consecrated Gothic cathedrals, singers sang at the same time different notes; then different rhythms, different melodies and different words. Yet the music was not cacophonous, but harmonious and exceeding beautiful. It must resemble what the world sounds like from eternity, what it sounds like in the ears of the unfallen Adam, or of the bodily assumed Virgin Mary.

In my own household, I plan to remember this day as a sort of holiday for sacred art and music, along with two others respectively associated with Suger and Hugh: