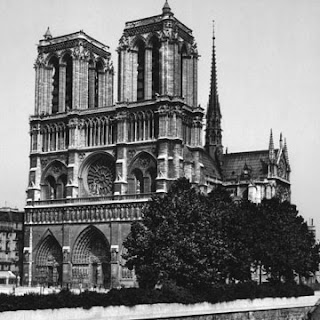 There will always be men and women who want religious art that is beautiful and traditional. However, every artist feels instinctively that there are two more necessary qualities. The art should be interesting, not just the same thing repeated endlessly with no improvement. And it should be real; that human minds and hands be engaged in its making is part of what makes it worthwhile. I fear that in the broader religious and æsthetic conflict between modernism and traditionalism, these qualities will be dismissed as unimportant.

The commentary in the aftermath of the tragic fire at the Cathedral of Our Lady in Paris is telling of this. Certainly I understand the dread that its reconstruction will be entrusted to some architect with no religious sensibility. But the reactionary demand to rebuild Notre Dame exactly as it was before is equally troubling. If the faithful never saw in a church fire the opportunity to build something even better, the Gothic cathedrals would never have existed at all. (There are rumors even that the Archbishop of Reims started the blaze himself in 1210!)

I fear that at some time soon, one of the great artistic or architectural treasures of Christianity will be ruined more completely and irreparably than Notre Dame, and that in response to demands that it be rebuilt exactly as it was before, living artists will dismissed from the task as too untrustworthy. Instead, a computer model will be constructed from the photographic record, and everything will be 3D printed in concrete or faux wood. Once that happens, a precedent is set, and living artists and architects thenceforth will compete, most likely at an economic disadvantage, against computers imitating the old masters.

Many who consider themselves religious and æsthetic traditionalists will celebrate this approach. Even now, I know that the easy availability of printed reproductions of 15th century paintings affects the demand for my own artwork. I don’t oppose such reproductions themselves; I have them on display in my own home. What I oppose is the notion that traditional art can be fostered through attitudes that would have made its existence impossible in the first place.

More tragic than to lose an artistic or architectural treasure is to lose the ability to make another one; more tragic yet is to lose the desire to make another one. To regain that ability requires real living artists; to regain that desire requires real religious faith and hope. There can be no technological substitute for these.
Posted by Daniel Mitsui