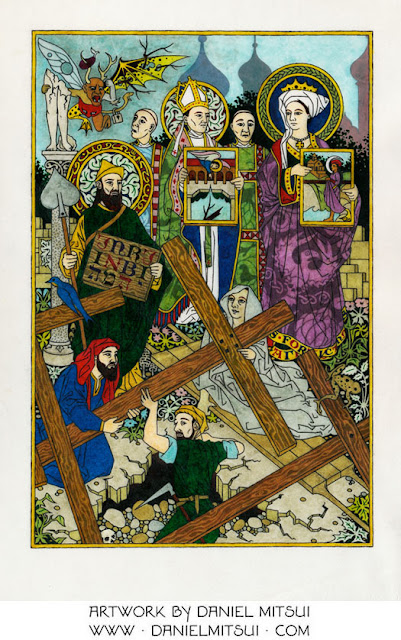 Exactly three years ago, I delivered a lecture, Invention and Exaltation at Franciscan University of Steubenville, in which I discussed the tasks of the religious artist in light of the two feasts of the Holy Cross, and the cult of relics in general. A revised version of the text is on my personal website here.


I often quote the fathers of the Second Council of Nicea, which was convoked in the year 787 to end the first iconoclast crisis. They said: The tradition does not belong to the painter; the art alone is his. True arrangement and disposition belong to the holy fathers. I consider the arrangement and disposition that belong to the fathers to be something like a relic, and the art that belongs to the painter to be something like the making of a reliquary. Artistry without tradition is like an empty reliquary; beautiful perhaps, but unworthy of veneration. Tradition without artistry is like a relic kept in a cardboard box; worthy of veneration, but deserving of better treatment.

Few ever have understood the power of touching God so well as that woman afflicted for twelve years by an issue of blood, who but touched the hem of His garment and was made whole. This woman, traditionally called St. Veronica, is an important figure in the history of sacred art. Early ecclesiastical historians attest that she erected a statue in her home city of Paneas commemorating the miraculous cure.

By looking to liturgical and patristic sources, a religious artist can draw a more complete picture, he can dig deeper, than by looking to magisterial documents only. He may unearth something wonderful. Discovering a tradition that has been lost is thrilling; it is like knocking the dirt from a buried piece of lumber and finding that it can yet raise the dead.

I consider it a sad mischance that the spirit of Gothic art was expelled from Christian Europe just as the Age of Exploration began. A few treasures of the Aztecs crossed the Atlantic Ocean in time to be admired by Albrecht Dürer, an artist who stood astride the end of the Middle Ages. Most of the treasures arrived too late. Medieval artists never saw the art of the Safavids or of the Khmers. Just imagine what they would have done, had they seen it!

In the fourth century, St. Paulinus of Nola recorded that the portion of the True Cross kept in Jerusalem had a miraculous property; no matter how many pieces were broken from it, its size did not diminish. St. Cyril of Jerusalem compared it to the loaves and fishes that fed multitudes and left over basketfuls. John Calvin famously scoffed that if all the pieces of wood venerated as fragments of the True Cross were collected together, they would make a big shipload. There are studies refuting this claim, but if the old tradition is to be believed, it might be correct!

Indirectly, the cult of relics gave JohannGutenberg his funding. I think that it gave him also the idea for the printing press itself. Consider the mechanism of a printing press: a matrix - which might be a wooden block with a holy picture carved in its surface, or a Biblical text set in forty-two lines of metal type - is inked, and touched to a different object, a piece of paper. Through touch, the matrix makes the paper into something like itself. The process can be repeated with practically no exhaustion of the matrix. Every printer knows that typeset text must run backwards; when printed, images are reversed, just like things reflected in a mirror.

Gutenberg believed that relics can impart their virtue through contact and reflection. In the years when he conceived his printing press, this was at the forefront of his mind, as was the problem of sharing this virtue among great multitudes; we know this as a fact of history. What Gutenberg invented was a technological metaphor for pilgrimage.