A COMPLAINT about DESIGN COMPETITIONS, and ADVICE to THOSE WHO HOLD THEM

A little less than a year ago, an Irish priest kindly sent me a message to let me know about a liturgical design competition. This was for the vestments to be worn at the upcoming World Meeting of Families in Dublin. The announcement of the competition is still online, here. It begins by saying:


How would you like to have one of your designs featuring at the heart of an event with an international audience of tens of millions? Would you like to see one of your creations being worn by the Pope? This opportunity is open to you as the World Meeting of Families 2018, being hosted in Dublin, Ireland, seeks a unique and inspirational design for the vestments to be used during the week of celebrations taking place from 21st to the 26th of August 2018.

The seminal 20th Century artist Henri Matisse famously designed chasubles for the Chapelle du Roasire in Vence, France, copies of which are now exhibited in the Vatican and in MOMA in New York. Elizabeth and Lilly Yeats, sisters of the poet William Butler Yeats and members of the Dun Emer Guild, crafted vestments used in the Eucharistic Congress held in Ireland in 1932. Their cloth-of-gold creation with intricate Celtic embroidery influenced by Elizabeth’s time in the circle of William Morris are still in use in St Mary’s Pro-Cathedral in Dublin today. Here’s an opportunity for you to follow in their footsteps.

The prize was 1000 Euros. After reading through the complete rules, three things came to my mind.

First, I was grateful to have the vestments made by the Yeats sisters brought to my attention; I had not known about any sacred artwork made by the Dun Emer Guild, and I am determined to research it.

Second, I understood why the priest thought me a good artist to undertake the project. I have some experience designing vestments. Although I have not done much of it as a freelance artist, I take very seriously the task of depicting vestments in my drawings. (I wrote about this here.)

I also have a strong interest in early medieval Northumbro-Irish ornament, and in the traditions of Celtic Christianity in general. The Lindisfarne Gospels and the Book of Kells are among my favorite works of art, and I have drawn dozens of pictures that imitate their style. I am dismayed by the appropriation of this sacred art by practitioners of neo-paganism and New Age spirituality, but even more dismayed by the haste with which many of the faithful misjudge it due to these appropriations. I recently made a coloring and puzzle book, Christian Labyrinths, with the intention of defending Celtic art as an expression of orthodox Christianity.

The pages in that book I composed from modular units of ornament, all scanned from my ink drawings. I have a big collection of knot, braid, spiral and key patterns that I can use to make Northumbro-Irish designs for textiles relatively quickly. Because I am unusually well-prepared for this kind of project, it only took me about 45 minutes, the day before yesterday, to mock up this cope. 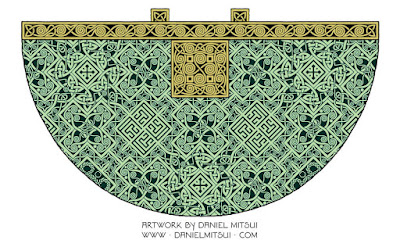 This is sort of thing that I would have submitted to the WMOF competition, had I decided to enter it. But the third thing that came to my mind after reading its rules was that I definitely would not enter it. It seemed so likely to work out poorly for the artists who chose to participate. I considered writing about this back when it was announced. Having seen its results, I regret not having done so.

In a form letter sent to those artists who did submit proposals, the organizers of the WMOF competition stated:


We were delighted with the number of submissions and the range of designs received. On this occasion, however, the Liturgy Committee for World Meeting of Families 2018 has decided not to select a winner from the received submissions.

Instead, according to their press release,


The vestments were produced by Haftina, a family business based in Poland, which specializes in liturgical vestments, chalice gowns, altar tablecloths and canopies. The vestment designs were created by Haftina in collaboration with the WMOF2018 Liturgical Committee.

These vestments are the ones in the picture at the start of this article. In the few days since these were revealed to the public, they have been disparaged quite a lot, mostly for their pastel hues and the triskelion emblem. It is not my intention here to offer criticism of them as art; I will even say for the record that I do not think that there is anything inherently wrong with either these particular colors or that particular symbol.

My complaint is rather on behalf of the artists who entered the competition, who put serious effort into preparing their proposals, making artwork that nobody else is likely to buy. None of these artists received so much as a cent in return.

Since the Liturgy Committee, by their own account, rejected a delightful number and range of submitted designs (which I am very curious to see), and instead gave their own instructions directly to the manufacturer, it is reasonable to assume that the resulting vestments represent exactly what they wanted all along.

If this is indeed the case, the Liturgy Committee could have gone to the staff artists at Haftina with specific instructions and payment at the start. There would have been no reason to dangle 1000 Euros before the artists of the world, challenge them to submit something unique and inspirational, or encourage them with lofty words about following in the footsteps of famous artists and having their work seen by an international audience of tens of millions. And there would have been no reason to disappoint them all, effectively putting the money back in a pocket and telling them never to mind.

Now I am not accusing the Liturgy Committee of the WMOF of any crime or fraud or sin that cries out to heaven, since they did say right there in the rules that they reserved the right not to reward the prize. And to their credit, they did not charge an entry fee. But still, what a waste of artists’ valuable time and hard work this competition turned out to be.

Design competitions do not need to be like this. They can be run in ways that benefit everyone. I do not think that their organizers act out of malice, but I do think that many of them have never really thought about the matter from the perspective of an artist.


1. Your design competition does not inspire creativity; it merely diverts it. I imagine that the organizers of many competitions, when looking at the submitted entries, think to themselves: How wonderful that we were able to help bring all this new artwork into being! Wrong. Artists, generally, have more ideas than they have time to realize. We do not sit around idle, making nothing, until some competition is announced. The time and effort put into making artwork for a competition is time and effort that is not being put into another project. That other project may very well be more artistically excellent, more personally fulfilling or more lucrative.

2. Paying someone fairly for his work is an obligation, not a prize. That is to say, if the prize to the competition amounts to no more than the cost of a commission, it is not so much a competition as a job application process. And it is absurd to ask job applicants to complete the task for which they will be hired (or a large part of it) before they know if they will be paid! If you want to know whether job applicants are well-suited to the task, you should determine that by using the same means that every other employer uses. You can ask for portfolios; you can ask for résumés; you can ask for interviews. Do not ask for free work.

3. Promise to give out the prize. If you are concerned that there will not be enough entrants, then you should do more to attract artists to the competition. That no artist will give you exactly what you want is the risk that you assume when you hold a competition. The entrants should not be required to assume that risk instead.

4. Do not charge an entry fee. Do not even consider it. If the artists are doing the work and you are benefitting from it, then the money should flow from you to them, not the other way. If you are using the entry fees to subsidize the prize, then you are just making the money flow about the pool of entrants, not into it. If artists want to wager their money against each other’s, we don’t need to enter design competitions; we can just get together and play poker instead.

5. Do not make any claims on the intellectual property of the submitted artwork, whether it wins the prize or not. If you want to purchase a copyright or an exclusive license, you should negotiate that separately.

6. The artists should have the possibility of profiting from their work even if they lose. If the artwork that you ask them to submit is so specific to your own purpose, organization or event that it has no chance of being sold on speculation, then you really should not hold a competition. Instead, you should find an artist whose modus operandi includes making drafts and revisions, and hire him for the job.

7. The artists should get some creative fulfillment from their work even if they lose. If you have such a specific idea in mind for the winner that you need to include a lot of detailed instructions about how the entrants should approach the project, then you really should not hold a competition. Instead, you should find an artist who is willing to collaborate with you to realize a project over which you exercise artistic control. The entrants should not be asked to forgo both artistic control and the certainty of payment.

8. The artists should get some publicity for their effort even if they lose. Display the entries, all of them, after deciding upon a winner. This will also hold you accountable for making a good decision.