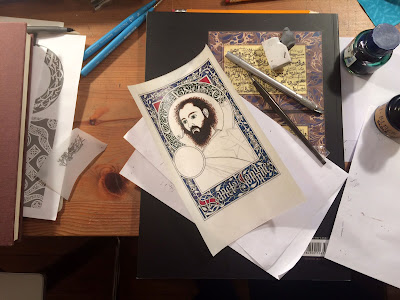 Can I really make a living at this sort of art? Is the market big enough to support one more illuminator or sacred artist?

I was asked these questions recently by a talented painter who had just begun to sell her work. This is the first part (of three) of my reply:

First, know that there are a lot of different ways to go about being a professional artist, and those I know who make religious art their specialty have very different modus operandi. I have a friend who makes artwork that is comparable to mine (small drawings in the manner of illuminated manuscripts) but his business is very different. He travels and teachs a lot, and I rarely ever do; I depend very much on a website for promoting my artwork and selling prints of it, and he doesn’t even have one.

I can only really speak about my own way of making a living here, and other religious artists are succeeding (or at least surviving) in very different ways - by exhibiting in galleries, illustrating picture books, teaching, getting grant money or something else that I do not do at all. I can attest that my own way has provided for me and my family for almost eight years. And it makes some sense for an artist in your situation, making the transition from an amateur to a professional.

Basically, this is how I operate. About half of my income is from original drawing, either commissions or sales of drawings made on speculation. Most of my drawings are commissioned; for several years, almost all of them were, but I am deliberately allotting time to speculative work now, because I want greater control over the content and to start a magnum opus project (the Summula Pictoria) illustrating the Old and New Testaments.

I frankly hate using computers, but I do depend on them for making my artwork known. Patrons find it through my website and social media accounts; there are payment buttons for buying existing drawings or prints, and instructions to e-mail me about possible commissions. Anyone who buys or commissions something or expresses interest in a commission I subscribe to an e-mail newsletter, sent every few months.

The rest of my income is from selling printed works derived from the drawings. I make a little from writing articles and giving lectures. I have some supporters who are well-known in Catholic media, and I send them prints on occasion to review, but other than this I do not pay for advertisement. I do not actively seek out commissions or enter into competitions.

This approach never made me too dependent on others, and thus I was able to become a professional gradually. I launched my wesite in 2005 and worked as a religious artist part-time until 2010, when I was finally ready to resign from my last day job. Those years gave me time to build a portfolio and a reputation.

I was able to figure, based on experience, how much money I was earning from artwork relative to the hours spent making it, and to contrast that to how much money I was earning at my day job. I became a full-time artist when the arithmetic suggested that I would make just as much money that way. I probably hesitated for about a year longer than necessary (much of which I wasted trying to find a different day job). I lost money for the first three months, but after that was making more than before.

So yes, it is possible. But I would recommend making the transition to being a professional gradually. Set up a website and a newsletter first, build a portfolio and a list of contacts. When you make and sell art, log the hours, count the money, do the arithmentic. You can devote more time to art as it becomes more relatively profitable. Take comfort in knowing that if you fail (financially, that is), you can just go back to the way things were before until you are ready to try again. I told myself before I made the plunge: if it doesn’t work this time, I can just go get a part-time job to make ends meet. I won’t be able to accept as many commissions, but I can still accept some, maintain the website and sell prints - and really, nobody else even needs to know.

Now all of that was made easier by three things: first, relative to other artists doing similar work, I draw very quickly. Second, the materials and tools for ink drawing are not very expensive. I can buy the best available, yet barely even think about the investment in materials and tools since it is so much less than that needed for oil painting or sculpture. And third, most of my drawings are small. So I was able to build a portfolio of many different works quickly.

At this time, I recommend that you put most of your effort into building a portfolio. Consider making more, smaller paintings (or drawings, if you are interested in that medium) in order to have enough works to build a website around and to give patrons an idea of what sort of art you are able and interested to make. Your existing portfolio is your biggest asset in securing new commissions.

Because fine art isn’t exactly a market. Artists aren’t fungible. I don’t have patrons come to me saying: I need a work of art. Please convince me that you are the artist who can make it for the best value. And if they did, I would decline to work with them; I don’t want any patron who treats me like an antagonist.

The good patrons, the ones that I want, are the ones who come to me saying: I admire your artwork, and have an idea for a drawing. Can you do this and what would it cost? They do not want an artist (generally speaking); they want me, specifically, to make something. They are willing to trust that I will do a good job based on what I have made in the past. They genuinely like what I am doing and want to help me succeed. So your task isn’t really to enter into an existing market and hope that there is space in it for you. Rather, it is to create an entirely new market, for your artwork specifically.

Aside from a portfolio, one of the best things you can have to establish this is an easy, fast, consistent way to calculate prices. I’ve seen artists lose a lot of commissions for taking too long to tell a patron how much he needs to spend. There are a lot of factors that can go into figuring these rates - your overall cost of living, time spent on the making, the materials, a general sense of what people are willing to pay - but they should be simple when presented to a patron. Mine are a function of area, so many dollars per square inch. There are different rates for black and white and color, for paper and calfskin. I revise them often as I figure out better how long things actually take or how much they actually cost, but never with the intention of differential pricing; who the patron is has nothing to do with it.

Another is to keep in regular contact with people who have already bought or commissioned artwork from you. That is the one population that is most likely to buy or commission artwork in the future. I’ve never done a mathematical analysis, but I would bet that most of my business is repeat. Until recently, an e-mail newsletter sufficed for this; not so much for selling new, featured works as for reminding patrons of my existence. Last September, I realized that it was no longer as effective, so I created social media accounts (half-hoping that they would fail so that I could stop using them, but, alas, they did seem to help).