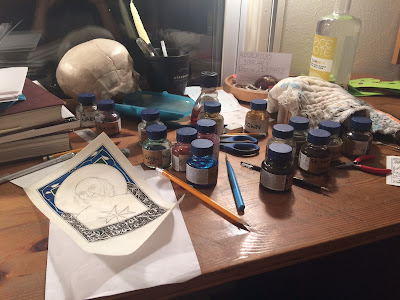 Can I really make a living at this sort of art? Is the market big enough to support one more illuminator or sacred artist?

I was asked these questions recently by a talented painter who had just begun to sell her work. This is the third part (of three) of my reply:

Religious art is necessarily traditional, and an artist making it in the present day has a challenge that no artist of the past had. With so many museums and galleries and rare book libraries making digital records of their collections, it is possible to obtain a file (sufficient for printing) of almost any historic masterpiece. That isn’t too much of a concern when making original drawings, because there are certain places where only original drawings are accepted. But if you sell prints of your work, you end up competing against the old masters for business!

In the fifteenth century, a painter who was a slightly-less-talented imitator of Jan Van Eyck might still be the most celebrated artist in his native city. In the nineteenth, he might be one of only a few in the world making those sort of paintings, thus successful in his own domain. But if he were selling prints of his work now, people would start to ask: Why shouldn’t I just buy a print of a Jan Van Eyck painting instead?

So it is advantageous now to make religious artwork that does not too closely imitate past artwork, even if there is nothing wrong, on a religious level, with being imitative. A lot of my patrons say that what they appreciate most about me as an artist is that I advance the tradition rather than just represent it. I think this can be done while keeping correct principles - the arrangement a disposition that belong to the holy fathers (as was said at the Second Nicene Council) and the presentation of space and time and light that agree with the scriptures and the liturgy and the fathers. The expanded flora and fauna in my drawings, the integration of Gothic art with Northumbro-Irish and Persian and Japanese art, the experiments with double-sided drawing: these are the sort of things that especially draw interest and praise.

While the task of an artist is to create a new market for his artwork, the potential size of that market is limited to those who find the artwork agreeable. There just are not very many traditional Catholics, so I depend also on patronage from people on different sides of the many fractures within the Catholic Church and from people without it entirely. (Honestly, I am hoping that more Protestants will take notice of my work.) I can honestly say that accepting patronage from all directions has not required me to compromise the content of the artwork; I think that what I have drawn can stand pretty well as a personal Credo - that I can profess belief in what it depicts. Early in my career I accepted some commissions that I should not have (New Age type things), but this was not out of financial necessity so much as my being too bashful to decline a request politely. Nowadays, I am pretty confident that when I am commissioned to make a religious drawing, I can figure out a way both to uphold tradition and to satisfy the patron - even when I find out that the patron does or says or believes things that I find profoundly disagreeable.

One thing that I’ve come to appreciate as a perk of the artistic profession is that people are inclined to like you. When someone asks me what I do for a living, and I say I’m an artist, they almost always smile and express admiration for that and assume that I am interesting and intelligent. Moreover, they are slow to take offense at anything I say in the context of discussing the artistic process. My lectures present a lot of provocative ideas, and I have worried about audiences reacting hostilely. They never have; I don't think that a scholar or journalist or theologian or priest would get such benefit. Indeed, I think that most people are more open to being convinced of something by art than by verbal argument.

I would recommend for now that you avoid making opponents among other religious artists or criticizing their work in public. That was something I realized I had to give up when I became a full-time professional. It will prompt others to belittle your own work in retaliation, and will repel more patrons that it attracts. I certainly do, privately, consider some religious artists to be incompetent or lazy or dishonest. But their patrons certainly do not need to hear that from me; their patrons are very likely to be interested in my artwork also, but not if I tell them that their taste and judgment are poor. And as I said, fine art isn’t exactly a market; other artists aren’t exactly competitors. I tell myself when they offend me that if every single person applying his creativity in the advertising industry were to give it up and become a really, really bad religious artist instead, the world would be a better place.