On DRAWING STARS, IDEAS of PRECIOUSNESS and RUSSIAN LACQUERED BOXES

I ignored the night sky for most of my life. I could make excuses for this - I have terrible night vision due to misshapen corneas, and until recently I lived in Chicago, surrounded by photopollution and buildings obstructing the view - but the real reason is that I simply did not pay attention. When my oldest son began studying astonomy as part of his homeschooling, our entire family began to notice the astronomical phenomena that we could easily see even in the middle of a large city: eclipses, the brightest constellations at different times of the year, the phases of the moon, the locations of Venus, Jupiter, Mars and Saturn.

I discovered above me something dynamic, varied and extremely interesting. Having moved recently to the semirural perimter of the metropolitan area, I am happy to see the stars more easily, although it is still not dark enough to see the Milky Way. Indeed, I can only remember having seen the Milky Way once or twice, ever. It is strange to think of it as something strange and special, since it would have been visible on every clear night to every person with reasonably good eyesight for the entire length of preindustrial human history.

I have been attempting to express in my art a new interest in the night sky. Although I have long used stars as part of my ornament, these have been perfunctory: basically regular five-pointed shapes and little circles, all of similar size and color. This hardly did justice to what almighty God created for signs and for seasons, to shine in the firmament of heaven and to give light upon the earth! I now try to use astronomical forms symbolically; developing the patristic association of the Old Testament with the moon and the New Testament with the sun, I give the patriarchs and prophets lunar haloes. These are crescents, except on those who encountered Jesus Christ (the Sun of Justice) face to face. (For an example, see my drawing of the Tree of Jesse.) I hope eventually to present the planets and stars also as symbols - as St. Zeno of Verona did in his homily that interpreted the zodiac as a baptismal allegory, or as Dante Alighieri did when associating the planets with different degrees of beatitude in his Paradiso - but reconciled to the observational knowledge of the present age.

More immediately, I have been trying to find a more interesting way of drawing stars. Looking first, as I usually do, to Gothic art, I was somewhat disappointed. So often here, the presentation of the night sky is even more perfunctory than mine had been. Consider the fifteenth century St. Thomas of Canterbury altarpiece painted by Master Francke. This is, undeniably, a great work by a great artist. But the only really interesting thing about the sky here is that it is red rather than blue or black; the stars are identical geometric shapes, evenly spaced on a grid of equilateral triangles.


In defense of Master Franke, I can think of a few reasons why he might have chosen to draw the stars this way. In some artistic media, repetition is necessary. Obvious examples are woven damask and wallpaper. Architectural ornament, due its scale and its being made with bricks, tiles and stenciling, is necessarily repetitive in many applications. Master Francke drew a connection between the Nativity of Jesus Christ and the Martyrdom of St. Thomas by using the same background for both. The latter, of course, happened inside a church, so the background pattern needed to be recognizable as either a night sky or as a diaper pattern painted on a wall.


But more than this, nobody who lived in the fifteenth century (unless, perhaps, he were wearing eyeglasses for the first time) discovered the stars as an adult. There was basically no photopollution, anywhere. I suppose that certain medieval men may have paid little attention to the night sky, as I long did. But few could afford to do this at a time when the stars were the most reliable way to tell direction and time. Clocks and compasses existed by the fifteenth century, but they are hard to see in the dark! The night sky was necessarily familiar to a medieval man.

What almost certainly was unfamiliar (and therefore remarkable and impressive) to him was a perfect geometric pattern. Think about this; flat, completely regular grids rarely occur in nature. Nobody who lived in the fifteenth century would ever have seen one, outside of a beehive, unless an artist took special care to measure and mark and make it. I expect that some of the people who saw Master Francke’s altarpiece for the first time excitedly whispered to each other: Isn’t that amazing? The stars - they are all exactly the same size! And they are all exactly as far apart! How did he do that so flawlessly?

Nowadays, repeating grids and patterns are everyhere around us; they are a mark of industrial mass-production, and therefore of cheapness - not of extraordinary care by an artist, certainly not of preciousness. This demonstrates a thorny problem for the contemporary maker of sacred art. Certain patterns, materials and colors that appear in older sacred art have a symbolic meaning based on Holy Writ, sacred liturgy or patristic exegesis; they are part of a tradition with an objective content that any maker of sacred art is required to uphold. But some were favored simply for being precious or rare, and this is bound to the economy and technology of the time and place in which the art was made. I see no reason for an artist of another time and place to repeat them.

This is not always easy to disentangle. Did medieval artists use purple and blue colors for symbolic reasons based on Divine Revelation, or did they favor them simply for the preciousness of murex dye and ultramarine pigment? Did they carve liturgical objects such as this crosier, or this one, out of rock crystal for symbolic reasons (referring to the Virgin Birth, perhaps, or to moral purity; it is noteworthy that they were carried by abbesses), or simply because perfectly clear objects were rare at the time? That matters to an artist deciding whether to make a similar crosier nowadays, when clear glass is cheap and abundant and unremarkable.


I do not know the answers to these questions, but I venture to propose that simple geometric patterns, applied in media where they are not necessary (such as painting), no longer have the same meaning or effect that they had in medieval art. When drawing stars (or mountains or trees or any natural forms) a maker of sacred art would do better to present them as varied and dynamic. I venture also to propose that flat gilding - such as that forming the background in other panels of Master Francke’s altarpiece - is no longer especially impressive in an age when shiny flat surfaces are made through industrial processes such as electroplating. That is not to say that a painter should eschew gold leaf backgrounds - merely that he should consider adding tooling or ornament or color to them, as was done in many of the best works of sacred art in the past. 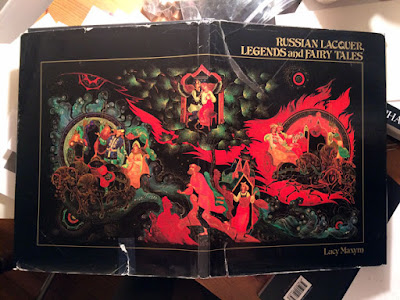 Moving on in my search for a more interesting way to draw stars - one that is yet agreeable to my basically medieval art - I remembered the Russian art of lacquered papier-mâché miniature boxes. I first learned about this art by accident, at a book fair where I found and purchased both volumes of Russian Lacquer, Legends and Fairy Tales by Lucy Maxym.

Working on a surface of dark lacquer (usually black), the painters of these boxes depict in bright colors and gold leaf scenes from secular Russian folklore, literature and history. Many of these stories I had encountered before in the illustrations of Ivan Bilibin and Gennady Spirin, and in Russian opera. The tiny paintings have an obvious stylistic affinity to the sacred art of the Russian Church, but depict Vasilisa the Brave, Baba Yaga, Ivan the Fool and Koschei the Deathless instead of Jesus and Mary and the saints. Their skyscapes are some of the most interesting that I have ever encountered - vigorously medieval, but not at all repetitive or perfunctory. This is how I wish the night sky had appeared in Gothic art. 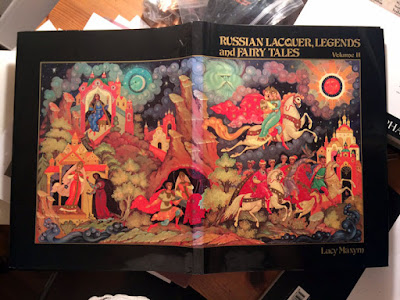 Studying this art more closely, I learned the circumstances by which it became established in four Russian villages (Fedoskino, Palekh, Kholui and Mstera) - circumstances that explain both its secular subject matter and its stylistic resemblance to sacred icons. Palekh, Kholui and Mstera were all important centers of icon painting before the Russian Revolution. In its aftermath, the icon painting was suppressed. Eventually, the artists found new work painting these boxes, using methods already established in Fedoskino. So while this art is deliberately secular, it was largely developed by icon painters; in one regard, it is a continuous development of the older sacred art. I would be very interested to see contemporary makers of sacred art claim some of its methods for their own. (The author of the two books mentioned appears to have done this herself.)


After their subject matter and size of these boxes, the most obvious difference between them and sacred icons is their background: black instead of gold. Black is of course traditionally associated with death and sin, so its use as a background in sacred art is questionable - although it has been used to striking effect in some exceptional works, such as a group of Flemish Books of Hours illuminated of the 15th century.

The use of a dark red, green, purple or blue background is better established in sacred art across the centuries. The purple uncials of the sixth century are religious manuscripts written in gold and silver leaf on dyed parchment. In medieval Byzantium, small icons were carved in low relief on tablets and pendants of bloodstone, serpentine and lapis lazuli and given gold leaf details.

In the late medieval occident, colors were associated with specific gemstones and specific planets; this is demonstrated, for example, in blazonry:

I question the assignment of certain planets in this scheme, but the idea here is, I think, a useful one nonetheless: symbolically, colors (even dark ones) may represent gemstones and celestial bodies. They too (not just gold) may communicate the ideas of preciousness and effulgence in art. Carefully applied, they do not change the traditional perspective of sacred art as a view out of heaven, in which the reflected light of the Sun of Justice illuminates everything. For this light is not one that destroys colors and distinctions, like a floodlight shone directly in the face; it is not blinding, but sight-giving.