A DEFENSE of PROPHETS and APOSTLES in MEDIEVAL CLOTHING 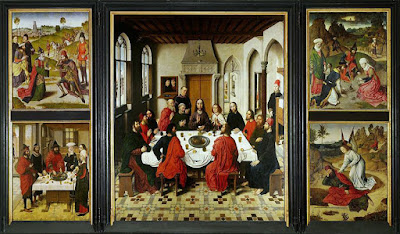 This is an art-historical truism that everybody knows and repeats. And it certainly is impossible to deny that, in very many works of art, sacred artists did show the material culture of their own eras and nations. The Last Supper triptych painted by Dieric Bouts presents Jesus Christ and His Apostles dressed as 15th century Flemings. They sit in a room whose architecture, tilework and furniture are characteristic of Bouts’s time and place rather than Christ’s. In the scenes from the Old Testament that flank the central panel, Abraham and Elijah are likewise dressed; the arms, armor and equestrian equipment are definitely late medieval.

But the matter is more complicated than that. Bouts used clothing significantly; I highly doubt that he ever saw someone walk down the street dressed as Melchizedek is dressed in his painting. He probably did see textiles and metalwork imported from the Orient, and imagined garb for the mysterious priest-king based upon these. A few hundred miles south of Bouts, Humanist artists in Italy were presenting their Biblical subjects in the material culture of ancient Greece and Rome. A few hundred years before Bouts, early Gothic sculptors and manuscript illuminators dressed their figures of Jesus Christ, the saints and angels, the prophets and patriarchs in long, simple robes that seem not to belong to any particular time or place.

Were I an academic art historian, I might spend a lifetime researching this development, tracing when and where it happened, and collecting reactions to it from artists, patrons, theologians and commoners. This innovation was undoubtedly tied to other aspects of medieval life and art. Over the Gothic era, sacred art was more and more made by professional laymen, who (unlike monastic artists) could spend time in the company of both male and female models. Portraiture emerged as a newly important genre of art, and its methods undoubtedly had an effect on the religious art made in the same workshops. And the religious theatre - miracle, mystery and morality plays - thrived, providing artists with countless ideas for depicting sacred scenes with familiar actors, costumes and props.

The art historian Emile Mâle wrote extensively on the influence of religious theatre upon religious art. While I think that he overstates it in some ways, his argument is mostly convincing. For example, as he points out in his study Medieval Art in France: the Late Middle Ages, the arrangement of the specific Apostles around the table in Bouts’s painting matches exactly the stage directions in Passion plays of the same era. Most likely, the change in angelic garb that happened in the art of the Middle Ages - from flowing robes to liturgical vestments (albs, dalmatics and copes) was made because actors playing angels in the mystery plays dressed this way. Early medieval artists depicted imaginary clothing because they were depicting what they imagined; late medieval artists depicted recognizable clothing because they were depicting what they saw.

Artists who do not understand the complexity of the matter might be tempted to take one of two approaches to their religious pictures. One is to dismiss the anachronisms of late medieval art as naïve folly, and attempt instead to reconstruct the material culture of the actual time and place from archæological evidence. The other is to accept entirely that sacred artists have always drawn Biblical figures wearing contemporary clothing, and to update that all the way to the twenty-first century, with Jesus Christ in blue jeans, driving moneychangers in business suits from the Temple and turning over tables of cash registers. (I will admit that, in one of my very earliest attempts at religious art, around 2003, I made a drawing like this, which I certainly never intend to show.)

Both of these approaches - the archaeological and the contemporary - make some sense. But they have long struck me as religiously unsatisfying, long before I was really able to explain why. In my own religious drawings - whether of the Old Testament, the New Testament or the lives of the saints - I most often depict the material culture of the Middle Ages. I propose that there are real advantages to this approach also, and that it is not simply an exercise in romanticism.

The strongest argument against an archaeological approach to sacred art is that sacred art is necessarily synoptic. Just as God sees all places and times from the aspect of eternity, so too does traditional sacred art present them in the same aspect. The prefigurement of the New Testament in the Old fascinated the Church Fathers; the same great idea expressed in their exegesis was expressed in art. In the late Middle Ages, it was popularized in books such as the Biblia Pauperum, which juxtaposed scenes from the lives of Jesus Christ and the Blessed Virgin Mary with the appropriate prophecies and prefigurements - four prophecies and two prefigurements each. Another, the Speculum Humanæ Salvationis juxtaposed each scene with three prefigurements. In Bouts’s triptych, three of the scenes prefiguring the Last Supper - the sacrifice of Melchizedek, the gathering of manna and the paschal lamb - are the same that appear in its pages, suggesting that the book directly influenced the painter.

The task of the religious artist, like that of the Biblical exegete, is to draw meaningful connections between chronologically and geographically distinct events, to say that they are really part of the same mystery. That idea is less apparent if the events appear to happen in different worlds, where the clothing and architecture and weaponry and serving vessels are all different, as archaeological accuracy would require. A work like Bouts’s triptych would require at least four different settings, for about twenty centuries separate the sacrifice of Melchizedek from the Last Supper - and indeed, about five centuries separate the sacrifice of Melchizedek from the Exodus, and about five more separate the Exodus from the prophecies of Elijah. And while the material culture did not change with such obvious rapidity in the ancient world as it has in modern times, it certainly was not consistent.

A consistent material culture between depicted events supports the idea of a consistent significance. The importance of this became more apparent to me as I started preparatory research for a large cycle of illustrations (which I call the Summula Pictoria), covering a vast span of time: from the fall of Adam and Eve to the martyrdoms of Enoch and Elijah in the reign of the Antichrist. How useful it is, for the purpose of symbolism, to be able to depict an identical chalice in the hands of Melchizedek and of Jesus Christ!

That consistent material culture need not necessarily be that of the Middle Ages, which I favor; it could just as easily be that of ancient Greece or of Ming China. But a medieval setting is very effective. For whatever reason, it has long been fixed in the imagination as the usual setting for things that happened in mystical times long ago, which is probably why most fairy tales and fantasy stories take place in a vaguely medieval world. Neither the events of the Old Testament, the New Testament nor the lives of (most) saints seem disturbingly anachronistic set there.

A religious artist should also consider that his art is meant to communicate without additional commentary. It should move the faithful to devotion easily, not spend their time and effort on figuring out its meaning. For that reason, many of the characters who appear in sacred art have established, readily recognized attributes: King David, for example, is a man in a crown playing a harp.

An artist painting David might give him an archaeological reconstruction of the sort of crown that a Semitic king might have worn in the Iron Age and the sort of stringed instrument that he might have played. I really do not know what these would look like; perhaps they would be easily recognized as a crown and a harp. I suspect that they would not; if my suspicion were correct, the figure would not be easily recognized as David, and the painting would require an explanation. Alternately, an artist might dress his figure of David in a tailored suit (because that is what King Felipe VI wears) and hand him a classical guitar. But this painting too would require an explanation to make the viewer understand that it is supposed to show King David. This is far more confusing than a picture of man dressed in the regalia of a medieval king and holding a medieval harp.

But none of these is what I want to hear recited or sung during a liturgical celebration according to Latin rite; there, I want to hear the Latin of Jerome and Venantius Fortunatus and Herman the Cripple and Adam of St. Victor. I want to hear it regardless of whether the words are those of Genesis or the Psalms or the Gospels or the Apocalypse. The experience of the twentieth-century liturgical experiments has taught that demands for archaeological accuracy and for demands for bringing things up to date both tend to result in iconoclasm. A fixed, medieval material culture in sacred art instead functions as the visual equivalent of a lingua sacra.