I have written in defense of the traditional hagiographies of patristic and medieval times, the wonderful accounts of the miracles and martyrdoms of the saints. Most of them, I contend, are worthy of belief, and all of them deserve the benefit of doubt. The first objection that I expect to meet is that some - such as those of St. Martha, St. George, St. Margaret, St. Sylvester and St. Benedict - involve dragons and other creatures generally considered mythological. Surely we know that such things never really existed, and that any stories involving them must be fictitious, right?

At the risk of being mocked, I contend that these legends too ought to be given the benefit of the doubt.

Our knowledge of what animals exist on the earth, and when and where they live or have lived, is not perfect. Just about everyone agrees that enormous reptilian beasts - some agile predators with sharp teeth and powerful jaws, some with wings spanning fifty feet - once roamed the land and filled the sea and the sky in great numbers. Conventional wisdom says that these were all extinct long before St. Martha or St. George lived. But really, conventional wisdom said the same thing about the cœlocanth before a fisherman hauled one into his boat in 1938. There are many examples of these so-called Lazarus taxa. And really, who knows with total certainty what sort of creatures were lingering in the wilderness in the time of St. Martha or St. George, or swimming in the River Ness in the time of St. Columba of Iona?

Creatures as fabulous as the half-ton, ten-foot tall elephant bird were still running about when the Council of Trent concluded. Creatures as fabulous as the giant squid and the colossal squid are still swimming the ocean depths; based on the contents of sperm whale stomachs, they are not even very rare, yet they evaded the prying eyes of mankind and all its cameras until a few years ago.

The bias against belief in stories of legendary creatures is so strong, that they probably would be dismissed even if evidence of their plausibility were made plain. My older son was for a time deeply interested in the deep ocean. In at least two of his books, I read some commentary that basically said: The giant oarfish may have inspired legends about sea serpents. Now look at a picture of an oarfish: 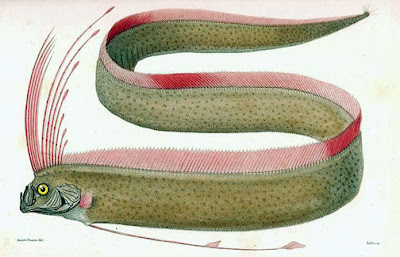 This creature grows to lengths of at least 36 feet (in the deep ocean, perhaps longer). Its head is covered with red spikes. It takes a practiced sort of scientistic myopia to look at it and say: This may have inspired legends about sea serpents instead of: Hey, look - a sea serpent. I mean, look at it; it’s a sea serpent. I expect that if small mammal resembling a white bearded horse were to prance up to a group of biologists and poke them with the long spiraling horn protruding from its forehead, the biologists would say: This heretofore unknown creature may possibly have inspired legends about unicorns.

Finally, I will note that the legend of St. George, as told in the old hagiographies and liturgical texts, is not the legend told by Edmund Spencer. St. George did not slay the dragon in battle. Rather, the dragon became tame, and was led into the city like a dog on a leash. The point, and it is an important one, is that a dragon, in the definition of these legends, is not merely a large reptile but specifically a demonically possessed large reptile.

Consider that the Gospels say plainly that demons can possess animals (like pigs). Consider what sort of behaviors have been documented (recently and reliably) in demonically possessed people: preternatural strength, levitation, spewing noxious liquids. Is there any traditional description of a dragon, in any part of the Golden Legend, that could not be satisfied by a demonically possessed crocodile? I know of none.

I will admit, however, that the heraldic type of dragon is more fun to draw.