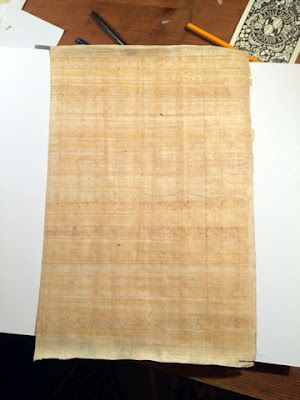 I bought a supply of papyrus about a year ago, mostly because my children were interested in Ancient Egypt. I’ve done a few small experiments on it, and found it a surprisingly good surface for drawing. Black ink sits well upon it and can be removed with gentle knife scraping; pencil marks lift off cleanly with a kneaded rubber eraser. The striations in the papyrus leaves cannot be hidden, but for some works this is not a problem, and can even be used to good artistic effect. 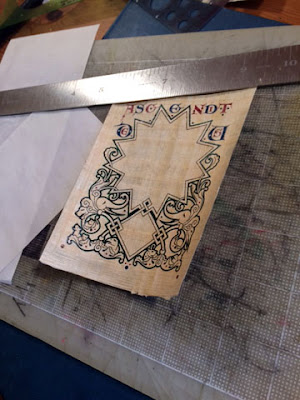 Papyrus was used for writing papal bulls as late as the eleventh century, and thus was circulated in medieval Europe. 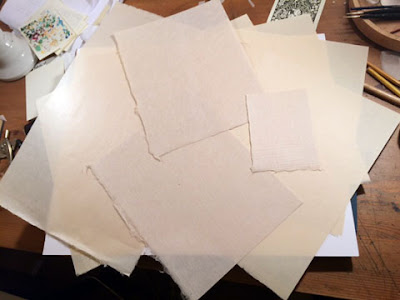 Washi is paper made in the Japanese manner, from kozo, mitsumata or gampi fivers. It is very thin and translucent (like tissue paper), but because the long plant fibers are left mostly intact during the papermaking process, rather than pulverized, it is surprisingly sturdy and difficult to tear. It is really beautiful stuff. 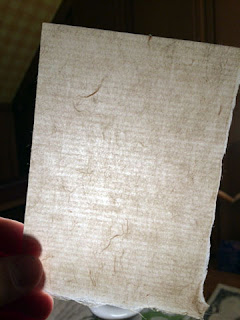 It is, however, the most difficult and frustrating surface on which I have ever drawn; knives, metal-tipped pens and erasers are difficult to use on it, as they raise up hairy fibers from the surface that are nearly impossible to flatten. The only way that I have found to draw effectively on it is to prepare a separate drawing (usually on Bristol board) using my usual pencils, pens, knives and erasers; then lay the washi over it; and trace the image in ink using a tiny paintbrush.