HAGIOGRAPHY and the BENEFIT of DOUBT 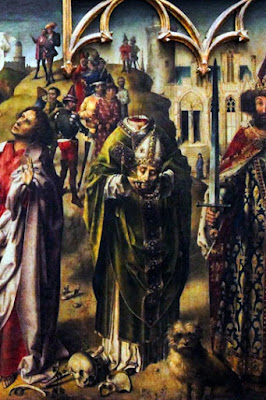 
It was no new departure when at the end of the thirteenth century Jacobus de Voragine wrote the famous Golden Legend, for in it he simply popularised the lectionary, preserving even its sequence. His compilation is in no sense original. He is content with completing the stories by recourse to the originals, and with adding new legends here and there. The Golden Legend became famous throughout Christendom, because it put into the hands of all men stories which until then had hardly been found outside the liturgical books. The baron in his castle, the merchant in his shop could now enjoy the beautiful tales at will.

The attack made on Jacobus de Voragine by scholars of the seventeenth century misses its mark. The Golden Legend, which they accused of being a legend of lead, was not the work of a man but of the whole of Christendom. The candour and the credulity of the writer belonged to his time. The stories of St. Thomas’s voyage to India or of St. James’s miraculous cloak ... though displeasing to the strict theologians trained in the school of the fathers of the Council of Trent, were universally accepted in the thirteenth century. They were read in public in the churches, and they were illustrated in the windows. To condemn Jacobus de Voragine is to condemn all the ancient lectionaries, and with them the clergy who read them and the faithful who listened.

The detractors of the hagiographical tradition which the Golden Legend summarized are legion - beginning with humanists such as Desiderius Erasmus and Lorenzo Valla, and including such churchmen as the Counter-Reformatonal iconoclast John Molanus, John of Launoy, Adrien Baillet and others whose skepticism triumphed in the great stripping of the calendars in 1969, on the instructions of Sacrosanctum Consilium to purge the liturgy of anything that smacks of mythology.

I will always be a defender of the Golden Legend and the traditional hagiographies - and more than a defender of them, a believer in them. That is to say, I believe that they are holy, deserving of preservation, and usually true. To a modern skeptic, this belief seems foolish and romantic; the sort of thing that could only be maintained through deliberate ignorance.

But the Golden Legend does not require a suspension of disbelief, nor a double standard of truth (one for reason, one for faith), nor any particular hermeneutic to believe. All that is required is the benefit of doubt. That is to say, most of the stories recounted by the traditional hagiographies give us no reason, in themselves, to disbelieve them.

A qualification must be made here. The hagiographies are not inerrant and I certainly make no claim to the contrary. They were compiled by human authors without divine inspiration. Some contain errors. On occasion, there are confused identities, or details disproved by real, substantial evidence. On occasion, there are contradictory versions of the same story, as with multiple claimants to the same relic. In such cases, someone must be wrong. When I first read the Golden Legend, I was impressed by the the intellectual seriousness with which its compiler approached his task. Blessed Jacobus readily admitted when a story was based on a doubtful source, or when different versions of it existed. Yet these are the exceptions, not the rule. They are rarities among the hundreds upon hundreds upon hundreds of hagiographies that have been quashed or edited beyond recognition in the name of historical accuracy.

The traditional accounts of nearly all of these lives of the saints become incredible only when they are read with a prejudice against the miraculous. And most of the proofs offered by scholars debunking the hagiographies and explaining what really happened are as baseless and arbitrary as the stories themselves are accused of being.

For example, according to the Golden Legend:


Instantly the body of Saint Dionysius stood up, took his head in its arms, and, with an angel and a heavenly light leading the way, marched two miles, drom the place called Montmartre, the hill of martyrs, to the place where, by his own choice and by God’s providence, he rests in peace.

Modern scholars are unanimous in rejecting the story of St. Denis carrying his own head for two leagues. Nowadays, everybody knows this didn’t really happen - what really happened is that two rival churches claimed the honor of being the place of the saint’s martyrdom and death, and the story was invented as a compromise. Or, what really happened is that ignorant medieval peasants misunderstood the artistic convention of depicting a decapitated martyr holding his own head and invented a story to match.

But there is no evidence whatsoever that the story is not true as recounted above. There is no evidence whatsoever that it was invented to pacify rival holy sites, or to explain the misinterpretations of cathedral statuary. All of this is is pure conjecture. The only reason that a man would accept the new explanations is that he gives the benefit of the doubt to the skeptic over the tradition; that he believes that a saint carrying his head two leagues is something that cannot - therefore did not - happen.

And the most popular explanation - that of medieval peasants misinterpreting art - betrays a misunderstanding of the way hagiography, iconography and devotion related in the Middle Ages. This explanation assumes that medieval hagiographies were essentially the product of folk religion, generated by the ignorant peasantry and only later accepted by the official Church. This is simply untrue; in the Middle Ages, the theologically learned participated in the cults of devotion, and usually initiated them. The authors of the lives were among the most educated men of the day, popes and bishops and abbots, St. Gregory the Great and St. John of Damascus.

Blessed Jacobus of Voragine, Archbishop of Genoa, was not a folklorist wandering the fields and writing down the fantastic bedtime stories of the unlettered. He merely collected, compared and expanded what was already written in the various liturgical martyrologies: what was read at Matins across Christendom. The legend of St. Denis was known and believed and chanted aloud by the very clergy who commissioned the cathedral sculptures. It was known and believed and chanted aloud by St. Thomas Aquinas and the scholastic theologians disputing at the University of Paris. They certainly had no reason to doubt it.

Of course, the Resurrection is an article of faith, something that a Christian is simply not permitted to disbelieve, and the words of the Old and New Testaments are inerrant; hagiographies are not (as Blessed Jacobus would be the first to admit). But our attitude toward the legends of the saints reveals and affects our attitude toward God, toward His creation, toward His revelation. The Old and New Testaments are not just books of stories whose veracity we are not permitted to question; they are records of God’s actions among men and as man, a record of events that really occurred - and they speak of marvels. We either live in a world in which these sort of things happen, or we do not.