An IMAGINARY EGYPT, GREECE, and BABYLON 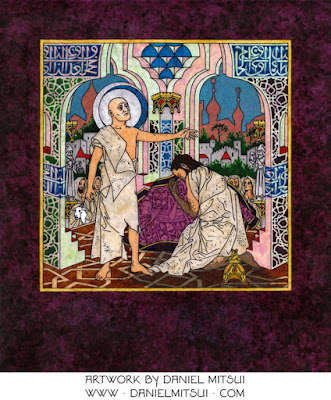 In most of my religious artwork, and especially in the Summula Pictoria, I depict a common material culture, that of the European Middle Ages. The clothing, architecture, arms and armor, horse tack, tools, scientific and musical instruments resemble those depicted in illuminated manuscripts, panel paintings, and tapestries from the1 4th and 15th centuries. Thisis regardless of whether the events depicted are from the Book of Genesis or the Acts of the Apostles. In an earlier essay (A Defense of Prophets and Apostles in Medieval Clothing), I explained why I choose to do this rather than take an approach that would represent with archaeological accuracy the various material cultures of the ancient world.

My intention is to draw meaningful connections between chronologically distant events; that is, to do visually what the Church Fathers did in their exegetical writings that associated the happenings of the Gospel with their prefigurements in the Old Testament. This is made much easier by being able to depict important objects - such as swords, crowns, or chalices - identically in drawings of events separated by thousands of years. I choose late medieval material culture because the artwork of this era is my favorite, and the strongest influence upon my own artwork.

However, this approach presents another problem. Sometimes, the difference between cultures is itself important - between, for example, that of the Hebrews and the Egyptians, or between the Hebrews and the Babylonians. Considering the entire range of events depicted in the Summula Pictoria, the peoples that need to be distinguished include:

Now the obvious choice for a visual artist who wants to distinguish between these peoples is to depict their own particular decorative art and material culture, especially when these are well-known, as they are for ancient Egypt. But since I am eschewing an archaeological approach for the Summula Pictoria, it makes little sense for me to employ it selectively; how jarring it would look to depict Moses and Aaron dressed in medieval garb, standing in a Pharaonic court recreated from ancient artifacts!

My own choice, while perhaps more difficult, is more consistent with my overall approach to religious art. I am creating a distinct decorative art for each of the cultures depicted in my drawings. But this is based not on modern archaeological knowledge; it is based on the way that these cultures were understood in the European Middle Ages. I am asking myself what an artist of the generation of Martin Schongauer might have thought about ancient Egypt and how he might have imagined it and depicted it. The answer to that question is where I am starting, and what I am elaborating.

This approach requires me to set aside the more specific knowledge of ancient Egypt available to a scholar living long after the decipherment of the Rosetta Stone and the excavation of Tutankhamen’s tomb. It requires me even to set aside my own memories of admiring ancient Egyptian art in Chicago’s Field Museum and Oriental Institute. By setting aside that, I am able to concern myself more specifically with the significance of ancient Egypt to western Christianity, and to Gothic art. What is its iconic meaning?

As far as ancient Egypt is concerned, an artist of the 15th century might have known that the ancient Egyptians used hieroglyphic writing, and believed that these pictures contained hidden meanings. But he probably would have known this through Horapollo’s Hieroglyphica, which was circulating among the intellectuals of the time, rather than direct observation of artifacts. Indeed, the drawings that Albrecht Dürer made to illustrate this text show very clearly how the hieroglyphics were imagined; stylistically, at least, in the same manner as European heraldic art.

An artist of the 15th century might have known the oracle to Pharaoh Thoulis recorded by John Malalas. He might have had some interest in the Asclepius and the Corpus Hermeticum. Those curious wisdom texts attributed to the ancient Egyptian sage Hermes Trismegistus had been considered by Lactantius and a few of the other Church Fathers to include prophecies of Jesus Christ. By the end of the Middle Ages, alchemy based on the hermetic tradition was widely practiced in Europe.

While I have little interest in alchemy itself, I appreciate the broad-minded consideration of the ancient wisdom traditions as expressions of longing for the yet-to-be revealed truth, rather than as mere pagan folly. I am looking forward to depicting statues of Thoth and Imhotep - whom the Ptolemaic rulers of Egypt associated with Hermes and Asclepius - in the background when drawing Moses and Aaron confronting the Egyptian magicians. The symbolic associations of the various rods and snakes will be very interesting to illustrate!

Now I am fully aware that most scholars consider the writings attributed to Hermes Trismegistus to be newer than the New Testament; their author was unlikely to have been, as previously thought, a contemporary of Moses. Likewise, the oracle to Thoulis is commonly considered an invention of the Christian era. And Horapollo’s interpretation of hieroglyphic writing, while still very interesting for what it reveals about Horapollo, is now known to be almost completely incorrect.

My intention in using this imagery is not to perpetuate falsehood. It is, rather, to present a broader truth that might have been lost in a more literal, archaeological presentation: that the culture of the Egyptians was mysterious and magical, indeed dangerously so, but still of great interest to Christians and, in its own way, prophetic.

I will mention also that there are many fascinating symbols in the traditions of Christian sacred art that are unworthy of literal belief - the legends of the bestiary, for example, that attribute behaviors to lions or pelicans that no zoologist has recently observed. When I present these images in the Summula Pictoria, it is always on damask, or on architectural ornament, or as statuary; that is to say, on things made by people. This is the same way I include legends associated with the Egyptians and other peoples.

Ancient Greece and Rome were of course much more familiar to the artists of the European Middle Ages than ancient Egypt; their languages, and much of their literature, philosophy, mathematics, and architecture were still known and studied and admired. Classical ideas such as the seven planets, the four elements and the four humors were granted their place in Christian symbolism. Plato’s Timæus was considered, by the 12th century scholars of Chartes, nearly as authoritative as the Book of Genesis.

A curious text of the 14th century, the Ovide Moralisé, applied the same exegetical method to the Metamorphoses that the Church Fathers applied to the Old Testament, seeing symbols of Jesus and Mary in the Roman myths. I intend to depict scenes from the Ovide Moralisé in stained glass windows throughout the Summula Pictoria, when the events depicted happen in a building built by Romans.

I have somewhat less to work with when considering the pagan nations of Asia that are so prominent in the Old Testament as conquerors and captors of the Hebrews: the Assyrians, the Babylonians, the Medes and the Persians. There was little direct knowledge of these nations, their art, and their literature in the era of Gothic art. Examples of cuneiform writing, for example, were not know in Europe until the 17th century.

A fascinating chapter in Emile Mâle’s study Religious Art in France: The Twelfth Century explains one way in which ancient Assyrian, Babylonian, and Persian traditions found their way into Christian art: through the influence of imported fabrics. During the Sassanid Empire, very ancient literary and artistic traditions were revived, and the Sassanid weavers copied the figures of Gilgamesh and the Lammasu onto their damasks. These same traditions were continued in textile workshops after the Arab conquest, and spread throughout Islamdom. The fabrics were traded to Europe, hung in churches, wrapped about relics, and copied by Christian artists. This explains why Gilgamesh and the Lammasu appear in the capitals of 12th century churches in France; their actual identity was probably unknown to the sculptors, except as a curious decoration seen on damask.

Some medieval intellectuals knew the name of Zoroaster, but this was the Hellenistic Zoroaster, known not so much as the prophet of the Persian religion but as the inventor of magic and astrology. His inclusion as a statue (alongside Ostanes and Hystaspes) in the Summula Pictoria serves the same purpose as the statue of Hermes Trismegistus, and that of Timæus of Locri; I do not mean to endorse either false history or occult practice, but simply to portray the wisdom traditions of the ancient pagans with some sympathy, as expressions of a noble want ultimately fulfilled in the Adoration of the Magi on Epiphany.

However, an artist of the European Middle Ages, when asked to imagine the culture of Assyria or Babylon or Persia, would probably think less of these obscure figures than of the culture of the peoples now living in those foreign lands. I believe that his imagination of their architecture and decoration would have been strongly impressed by Islamic art.

Islamic art was known in medieval Europe, from the memories of crusaders and pilgrims, from the artistic legacy left by the Moorish conquerors of Sicily and Iberia, and from the trade of portable goods such as damask and carpets and metalwork.

By the 14th and 15th centuries, it was common for these goods to show up in Christian paintings. In Gentile da Fabriano’s famed Adoration of the Magi, the halo behind the Virgin Mary’s head is modeled on a Mamluk platter, complete with Arabic calligraphy spelling gibberish.

This sort of imitation reveals the magnanimity of Christian artists in deeming all beautiful forms worthy of being offered to God in sacred art, It was never more appropriate than in a painting where the Kings of the Orient offer their treasures to the Christ Child. I take this as a sufficient precedent for imagining those treasures of the Orient in the guise of Islamic art. And personally, I am an enthusiastic admirer of this art, and eager to make it an influence on my own. I am fascinated by girih tiles, muqarnas, thuluth script, and square kufic.

Now obviously it would be anachronistic and misleading to introduce the doctrines of Mohammed into illustrations of the Bible, and that is not my intention. I avoid depicting any specifically Islamic imagery or writing. I have designed geometric patterns inspired by girih tiles, but I do not use the same set of five basic shapes that were used to lay out the ornament in medieval mosques. Instead, I designed my own tiles, based on shapes with 3, 4, 6, 8, 12 and 24 sides.

I decorate buildings with calligraphic ornament, inspired by thuluth script. But the script is not actually Arabic; it is pseudo-Arabic, like the letters on the halo in Gentile da Fabriano’s painting. The only difference is that, rather than being complete gibberish, it is a cryptogram that I use to encode messages in Latin. 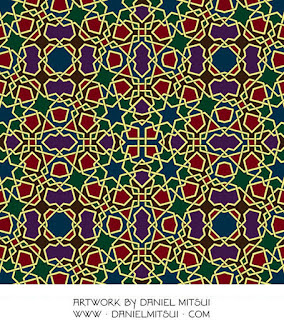 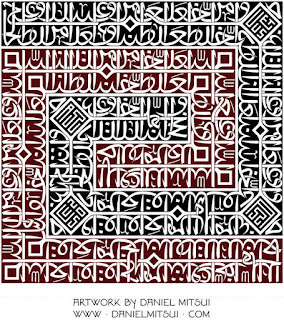