PRELIMINARY RESEARCH for the SUMMULA PICTORIA

I want all of the pictures in the Summula Pictoria to have a consistent visual language, a signature iconography that very precisely shows their theological meaning. This requires a lot of research and consideration at the start of the project. Over the past two months, I have been working on three problems.

The first is the manner in which I will depict different cultures. I intentionally set most of my religious drawings, whether of the Old Testament or the New, in the material culture of the late Middle Ages, rather than in an archaeological reconstruction or a contemporary setting. (I have explained the reasons here.) However, Biblical scenes sometimes require making distinctions between Hebrews, Canaanites, Egyptians, Sabeans, Syrians, Babylonians, Persians, Indians, Greeks and Romans.

My plan is to take the same medievalist approach to all of these, distinguishing them by their architecture and clothing and weaponry, but without making any direct reference to their actual ancient artifacts.

The second task has been planning the patterns that will appear on clothing and wall hangings in the Summula Pictoria. I certainly have no plans to draw perfunctory floral designs here; there will be a parallel narrative of symbols running through the entire series of drawings, on damask.

The third task has been figuring out how to depict aspects of sacred anthropology. I want specific devices to indicate whether I am drawing a body united to a spirit, a dead body or a disembodied spirit; whether a living body is lapsarian or glorified; whether a dead body is corrupt or incorrupt. I want the haloes to differ for saints of the Old Testament and saints of the New Testament.

In most of the pictures that I plan to draw, this is fairly straightforward. But consideration of the difficult cases has occupied my mind a lot recently. Were Dathan and Abiram still alive in their bodies when Jesus Christ descended to the dead? Were Samson and Solomon among the elect? At the Transfiguration, was Moses in the body or out of it? Researching questions like these has led me to some really surprising and rewarding conclusions.

My desks are littered with many pages of handwritten notes, like these: 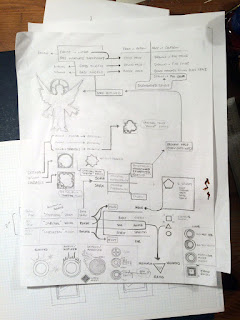 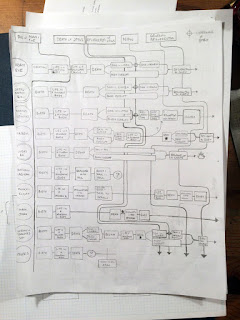 I will write more about these matters soon.
Posted by Daniel Mitsui