I have more and more been using the translucent quality of calfskin vellum to artistic advantage. In my recent drawings of the Invention of the Holy Cross and of St. Ambrose with the Emperor Theodosius, I depicted background architecture, damask patterns, wood grain and coral fossils within stone on the reverse side; these show through the surface faintly, and more clearly when the vellum is held up to light. These are the first works in which I have used this method as extensively as I plan to use it in my future drawings for the Summula Pictoria. 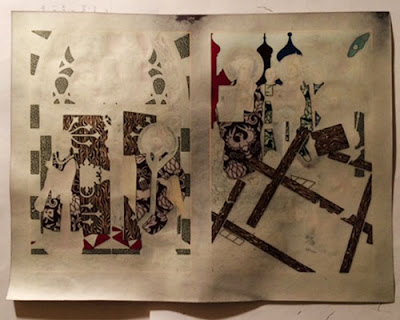 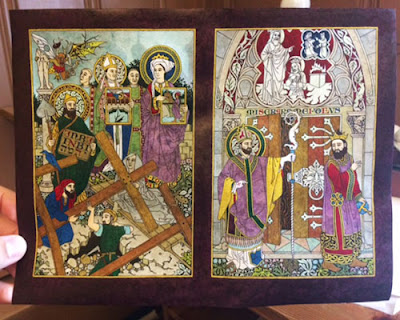 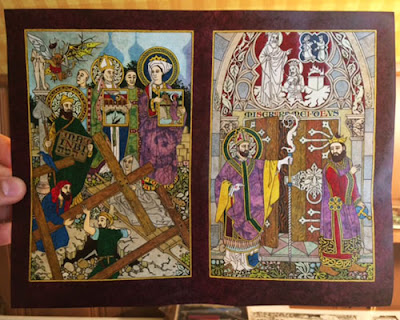 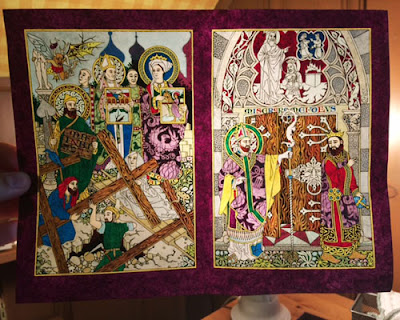 Here I am attempting to invent a new artistic medium, which I have named in my mind the translucent icon; My desire to do this was born of a fascination with perspective and lighting in medieval art, which have an altogether different significance than in most postmedieval art.

In the composition of medieval holy pictures, the artists’ intention is to depict earthly events from a heavenly perspective; to depict things as though seen by the eyes of a prelapsarian Adam, or of a saint in glory (at least insofar as the artists are able, being themselves fallen men and women). This is why medieval holy pictures do not include a single vanshing point or light source within them; the infinite and eternal and the source of all light is behind the artist and the viewer.

Here I am attempting to create works of art that have something of the nature of illuminated manuscripts and panel icons, and something of the nature of stained glass windows, and that are beautiful no matter which direction they are struck by natural light. Beheld at different places or at different times of day, the drawings can have an unlimited variety of appearance.

I beleive that it is especially important in the present day, when so much artwork (including my own) is commonly seen in the form of digital scans, to assure that original works of religious art are inextricable from reality. As the adage goes, to a man with a hammer everything looks like a nail; to a man with a scanner, everything looks like a .jpg. It is tempting, as an artist in the present day, to disregard any artistic method that does not translate to a scanned image (which is absoultely flat, absolutely static, identical in every light, without any objective size). I am rather determined to do the opposite.